An Australian film, from an Australian book – if you live in Australia, that’s something to be celebrated.
In fact, I think the birth of every book and film should be the occasion for a party.
So on Thursday evening, the day that Return to Nim’s Island opened in Victorian cities, actor Toby Wallace’s family and friends joined with mine at the beautiful Palace Westgarth for our own Melbourne ‘premiere’. And although there was no red carpet, lots of people got into the spirit and ‘frocked up’ – which must have surprised the people who simply turned up at their local cinema to see a movie. 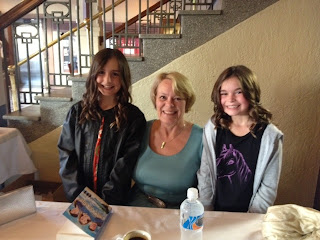 What a lovely night. My only regret is that, thanks to Readings Books, I was so busy signing copies of The Nim Stories that I didn’t get a picture of the crowd in the lobby. (Just to be clear – I’d never regret signing books! Just wish I’d got a picture too.) Friends came from as far as Ballarat and Bendigo, Ocean Grove and Gippsland; friends from different periods in my life. My editor, Sue, whom I’ve worked with since 2000, and the editor for The Nim Stories, were both there. Editors are never honoured enough; it was lovely to sit with Sue as to watch the movie that she’s been nearly as excited about as I have.
Seeing the film in the darkness of a big cinema was a different experience from the fun of watching it outdoors on the inflatable screen at the Australia Zoo’s Crocoseum. Seeing it for the second time also meant I was less emotional and could watch it more logically - and liked it even more And so did the audience. The buzz going out was much stronger than going in, when people were simply happy to be celebrating with a friend. 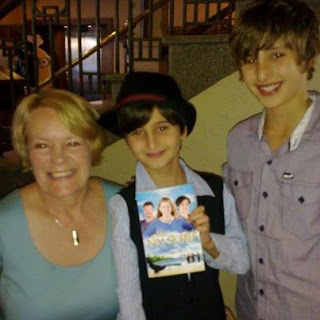 Then some of the girls realised that Toby Wallace was in the audience. I don’t know what the word is for buzz to the power of 10, so I’ll share a text I received on the way home from a 13 year old friend.

'The movie was terrific. I loved everything. It was such an experience to meet Toby!!!!!!! All the girls loved it and there is non stop talk about Toby and Bindi.’