I've been copy-editing all day - that is, answering the copy editor's queries. Emailing back with the solutions – with what I hope are the solutions –  I was a bit discouraged to see how short the document was, considering it was a day's work. Or, six hours, to be precise – because I do feel the need to be precise, and correct, and maybe even a bit pedantic, because that's what copy editing is. That's probably why these three sentences have already been rewritten several times. (Three because I'm just counting the first three, not the explanatory fourth, or this explanatory fifth.)

But I think the real reason copy editing takes so long and feels so draining, is that we need to jump back and forth between the pedantry of noticing unintended rhymes (yes, even after reading aloud, a few creep in), or of the two words that have been repeated in one sentence, or the phrase that has been lovingly, sickeningly, reused six times in the book. My editor once told me that every author seems to have one word or phrase that they get stuck on for different books, but it's little comfort. They're often words I don't even particularly like, and I have no idea why they've snuck in so persistently.

That unfinished comparison was of course a trick to see if you were paying attention with good copy-editing eyes. To start again: We need to jump back and forth between pedantry and creativity. It's very easy to get stuck on replacing the word that seems to be the problem: replace 'too' with 'also' because you used 'too' in the previous sentence. Except that for some reason, 'also' just sounds awkward there. And you can't replace the previous one because it's the other meaning of too.

At that point you need to get up, walk away from the computer, let the dog out, call the dog back in from digging in the mud, wash the dog, wash the floor (okay, maybe the copy editing wasn't six hours straight). But often the instant you walk away from the screen, you see a completely different, even simpler, and much better way of saying that very simple sentence. 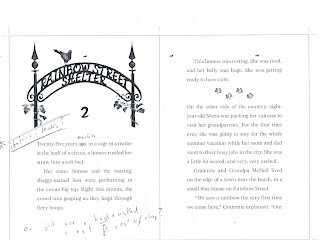 (If you're curious, this copy edit was on the fifth Rainbow Street Shelter series: STOLEN! A Pony Called Pebbles. ABANDONED! A Lion Called Kiki has just been released, so I think Pebbles will be published in November this year. With a bit of luck, we'll even have finished the copy edits by then.)